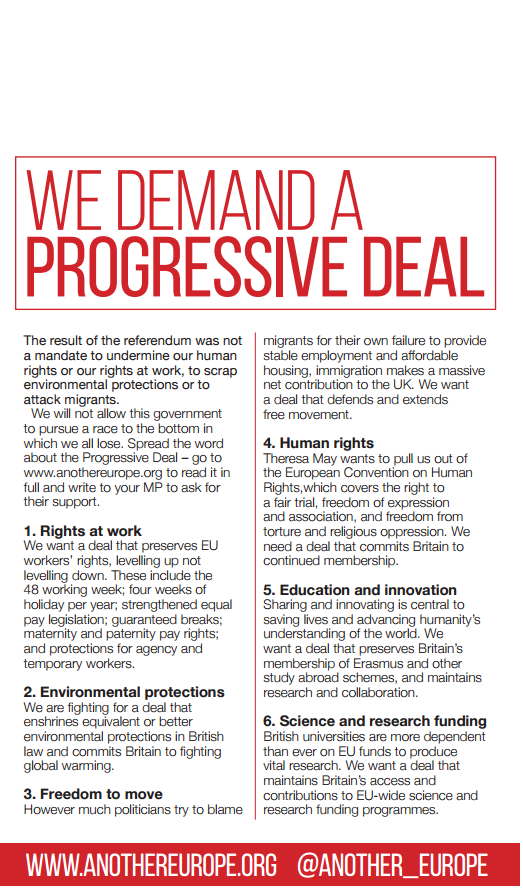 With Article 50 triggered, we are entering a dangerous moment for our democracy. The government is pursuing a harmful, extreme form of Brexit for which it has no democratic mandate. Corporations will seek to influence the outcomes. But popular will and progressive politics are increasingly shut out.

In the shadow of an increasingly volatile world, we stand for co-operation between people and across borders, and we are for democracy. The British people must have the defining say over what kind of deal is reached.

Be a part of the flagship campaign to save the 6 progressive elements of EU membership.  We identify those as:

We all have the right to know what is being negotiated on our behalf. The result of the referendum was not a mandate to undermine our human rights or our rights at work, to scrap environmental protections or to attack migrants. We will not allow this government to pursue a race to the bottom in which we all lose.

There is still everything to play for, and in the coming months we will unite to campaign for a deal which guarantees the rights of workers and migrants, and which maintains key environmental human rights protections. In an increasingly nasty and divided world, we will fight for a future of international cooperation and social justice.

This is our deal – bringing together people across civil society and different political parties in order to put forward a progressive vision for the outcome from the negotiations.

You can join the fight for a Progressive Deal today.

When Britain leaves the EU, workers could lose important legal protections. These include the 48 hour limit on weekly working hours; four weeks of holiday per year; strengthened equal pay legislation; guaranteed breaks; maternity and paternity pay rights; and protections for agency and temporary workers. If Britain and Europe attempt to compete with each other, this could lead to a race to the bottom on employment rights. We want a deal that:

In the EU referendum, no-one voted for environmental protections to be scrapped – but that could be the reality unless we retain those currently enshrined in European regulations. Climate change and pollution do not respect borders. We want a deal that:

The right to move across borders is a right that should be enjoyed by everyone. Without freedom of movement, it is a right enjoyed only by the rich. Free movement of people between Britain and Europe has enriched our societies, offered millions of people opportunities, and created bonds of love and friendship that cut across national frontiers. We want to see the right to choose where to live extended, not curtailed in the name of a concept of fairness that leaves everyone with the lowest common denominator of rights. However much the political establishment try to blame migrants for their own failure to provide stable employment and affordable housing, immigration makes a massive net contribution to the UK. We want a deal that:

The European Convention on Human Rights, set up in the aftermath of the Second World War, enshrines the basic rights of European citizens – including the right to a fair trial, freedom of expression and association, and freedom from torture and religious oppression. Britain’s membership of the Convention does not disappear on leaving the EU, but it will become much easier for the government to withdraw from it. The current government has already indicated its intention to abolish the Human Rights Act, which covers much of the same ground. We want a deal that:

Tens of thousands of British students study abroad every year, using programmes like Erasmus to improve their education and expand their horizons. Free and easy access to higher education institutions in the EU is a vital part of sharing and creating research which saves lives and advances humanity’s understanding of the world. We want a deal that:

Britain’s science and academic research receives a large quantity of its funding from the EU. The UK is the second largest recipient of EU research funding through the Framework Programme (FP7) funds. Between 2007 and 2013, the UK received €8.8bn in research funding, much more than it contributed. 71% of this went to universities, which are more dependent than ever on these funds to produce vital research. We want a deal that: