On Saturday 12th December, Another Europe is Possible will be holding its annual members' conference. 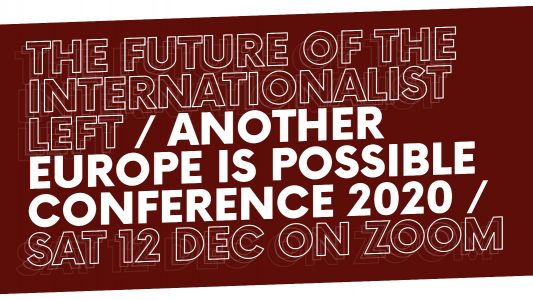 AGENDA:
11:30: Welcome
11:40: What next for the internationalist Left: how do we win across borders?
Speakers include:

On Saturday 12th December, Another Europe is Possible will be holding its annual conference.

For five years, we have stood together against the rising tide of right wing nationalism here in the UK and all over the world, and fought to put forward a radical alternative politics. Since 2015, Another Europe has led the left case against Brexit, built links with the left internationally,  and been one of the only consistent voices for free movement and migrants’ rights. We have also played a key role in mobilising mass movements against Donald Trump’s state visit and on #StopTheCoup.

Now, with just a few weeks to go until the UK falls off the Brexit cliff-edge, with a US Trade Deal being rushed through, and in the middle of an era-defining pandemic, you are invited to join the discussion about what we do next. The need for a radical, internationalist movement to combat the politics of Johnson, Duda, Trump, Bolsonaro and others has never been more clear.

Although it will open with a great panel with big name speakers, our national conference is primarily a democratic event. It’s open to all members of Another Europe to vote and submit proposals. If you haven’t already, join Another Eurppe here for as little as £1 per month: https://www.anothereurope.org/join