Four hundred migrants are on hunger strike in Brussels to demand regularisation and basic rights. Their situation is getting desperate. 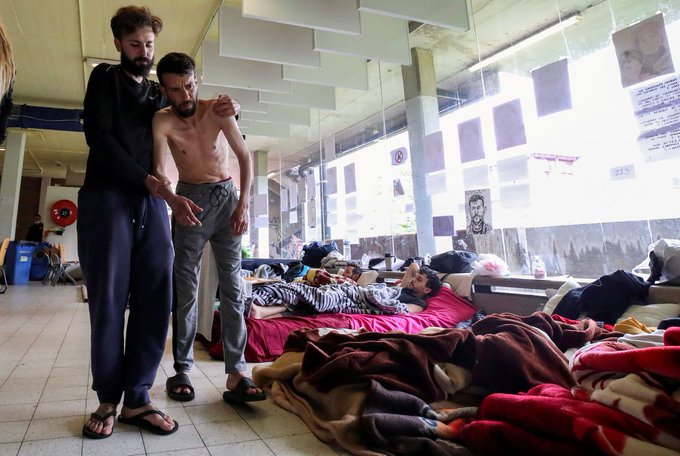 Farida is 51. She was born in Belgium. Her whole family has the Belgian nationality. Farida has a steady job. She cleans offices and public buildings, for 6 to 8€ an hour. Her last application for regularisation of her administrative status got rejected and she is now subjected to a formal order to leave the territory, issued by the state.

Kiran fled a civil war in Nepal and filed an asylum claim in Belgium, 16 years ago. While his asylum request was still pending, he got a job. He was then paid 10€ an hour. When his asylum claim got rejected, his wage fell to 2,5€ an hour. His daughter, born in Belgium, is now 5 years old and speaks fluent Flemish that she learned at school. The family introduced five applications to be regularised, they were all rejected.

Mohamed has been living in Belgium for 17 years. He treasures an old picture of the inauguration of the new Brussels’ metro. “I worked on public construction sites. […] We dug the metro tunnels linking the four lines. It was tough. What I recall most vividly, is that we were always gasping for oxygen.” Mohamed worked for a shady subcontractor “without any insurance or protection”. He adds “if we got lucky, they would pay us 3€ an hour.”

Farida, Kiran and Mohamed are part of a political collective made of 475 undocumented migrants. For the last 50 days, they have occupied and conducted a hunger strike in three sites in Brussels (two universities and a church). Having first engaged into more traditional forms of political actions (lobbying, demonstrations, occupations, etc.) and pushed to the edge by the consequences of the Covid-19 pandemic, they decided to turn to a political action of last resort: they rendered visible on their own flesh the violence to which they are subjected on a daily basis. Reduced by their economic exploitation to the status of pure bodies, they turned their organisms into the site of the struggle for their legal recognition. According to the physicians who look after them, their hunger strike entered the “critical” phase two weeks ago. Their bodies, having burned all of sugar and fat, start to consume its own organs, including the heart. Death becomes then a real and imminent threat.

The undocumented migrants’ demands are simple. First, they want the hunger strikers to be regularised. Second, they want the definition of clear and permanent criteria of regularisation, that would be applied by an independent commission, to be put on the government’s political agenda.

The current state secretary for asylum and migration, the christian-democrat Sammy Mahdi, is refusing to open any negotiation on this basis. He’s resorting to a hefty argument to justify his rigid stance: the undocumented migrants have received an order to leave the territory, issued by the state, to which they did not comply. They are therefore individually responsible for their administrative situation.

Is this juridical formalism enough to justify denying the undocumented migrants any legal status? It conveniently sweeps under the carpet the fact that Belgium (and more broadly the European Union) often produces the migrants’ irregular situation. There are 150,000 persons in Belgium living and working in Belgium without papers. According to a study produced by the Pew Center, around 3.9 to 4.8 millions persons are undocumented migrants within the EU.

This massive number is the result of a deliberate shift in the design of migration policies. Over the last 20 years, European states have collectively and drastically reduced the legal migration pathways to Europe. They promoted restrictive and arbitrary practices within their public administration, toughening for instance the conditions to renew temporary residence permits – which pushed many migrants into an irregular status. They externalised the sensitive task of controlling the European external borders, delegating this responsibility to neighbouring states (such as Turkey and Libya) whose records with regards to migrants’ welfare is poor, to say the least. They also allowed their labour markets to become segmented between the workers with and without papers, which further fuels social dumping into economic sectors that cannot be outsourced (construction, food and hospitality, care, etc.) while facilitating the exploitation of an insecure workforce.

This juridical formalism also overlooks the peculiar history of Belgium’s migration policies. Over the last decades, roughly every ten years, Belgium grows aware that there are many undocumented migrants living on its territory and that this situation is unsustainable in the long term. Belgium then proceeds to large-scale but temporary regularisation campaigns (in 1999-2000 and then in 2009-2011), swearing each time that this is would be the last. By contrast, France and Spain have long concluded that this erratic management of migration led to a political dead-end. They opted to set up some clear and permanent criteria (such as the length of the stay, a stable job, proven social ties, etc.) in virtue of which undocumented migrants can be regularised on a continuous and individual basis.

Fear of the far-right

The Belgian government – as many other governments across Europe – is committing a grave political mistake. It is petrified by the rise of right-wing nationalist parties. It is attempting to demarcate itself from this political offer (while nevertheless appealing to its electorate) by implementing migration policies that are “firm but humane”. But pragmatically it means that the Belgian government is currently implementing a watered-down version of the migration platform promoted by nationalist parties while claiming to hold in high esteem the human rights and the norms of international law.

For all the reasons above, we urge the Belgian government to resume as soon as possible the dialogue with the hunger strikers in the perspective of their regularisation and to launch political reform setting up some clear and permanent criteria of regularisation for the future.