The latest diplomatic row between the UK and EU is a distraction from the real issue - the prioritisation of profit over human life and good sense. 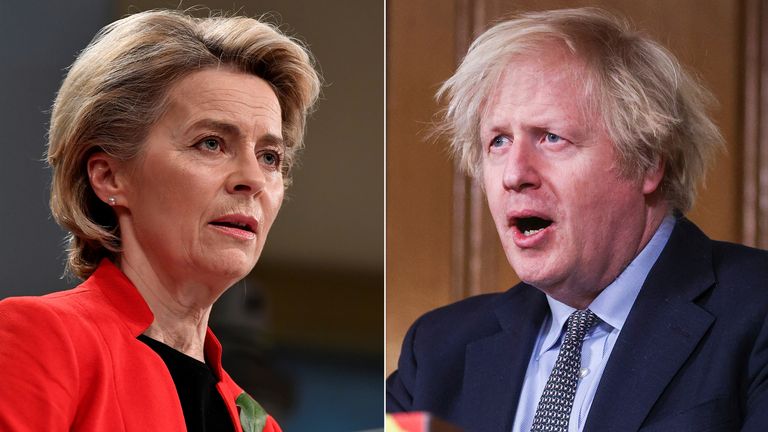 Recent weeks have seen mounting tension between the UK Government and the European Commission over vaccine distribution. The fraying of already fragile diplomatic relationships could yet disrupt the rollout on both sides of the Channel.

On the one hand, contract fulfilment has clearly become an issue for AstraZenecca. On the other, it could be argued that many European countries, gripped by a deadly third wave of infection, are scrambling to deflect blame from their own failures. The current situation is not, however, just another example of the soured friendship between the UK and the EU. It is rather a symptom of the fact that both sides are prioritising the interests of pharmaceutical companies, who are guarding their monopoly over the vaccines.

While Ursula von der Leyen has made some positive remarks about a potential suspension of intellectual property to ensure supply, at this week’s summit European countries only debated export bans. Releasing the vaccines  – whose development was heavily dependent on public money – from the monopoly of the pharmaceutical giants and allowing generic production globally is the only sustainable solution not only to this latest squabble between the UK and the EU, but to the whole pandemic across the world.

So what is vaccine nationalism, and why are we talking about it?

On one level, it might look like the UK has done an excellent job in its vaccine rollout and has made the right call in following a ‘Britain first’ approach to procurement. But we are now entering a phase in which we will experience the consequences of this approach – and we could see a prolonging of the covid-19 crisis both domestically and internationally.

Alongside other rich countries, the UK prioritised not only its national interests but, more importantly, the financial interests of pharmaceutical companies which were allowed to essentially privatise the work of public research institutions and operate a monopoly on the vital treatment and prevention medication developed to fight covid-19. These were then sold almost exclusively to high income countries. Part of the reason why we were recently told there would be a delay in rolling out vaccination to under 50s is a delayed supply of 5 million vaccines from India. The reality is that our apparent national success has come at the cost of some of the most vulnerable people across the world, who will now be be denied vaccine access so that relatively healthy and less exposed people in the UK can get their vaccine before the summer.

“But shouldn’t we look after our own first?”

This is an incredibly unjust approach to healthcare and the right to life. While here in the UK the deployment of the vaccine to under-50s will be delayed by several weeks, across the world developing nations will not even be able to vaccinate key workers before 2022, and will not develop population immunity until 2023. Of the 508 million doses so far administered across the world, only 9.4 million have been distributed in the whole of Africa.

As we saw with the more infectious Kent variant, as well as the Brazilian and the South African strains, the virus will mutate wherever there is community transmission. A more equitable distribution of the vaccine would ensure everyone’s safety – less spread means less chance for mutation and less need for additional booster vaccine developments.

“It’s a basic problem of supply – there aren’t enough manufacturers to respond to global demand for the vaccine. “

Contrary to a lot of what you may hear, there is capacity across the world (including in many developing world countries) to begin immediate production. The problem is not the physical ability to produce the vaccine, but monopolies which mean that this would be illegal..  Early on in the pandemic, pharmaceutical giants refused to participate in efforts by the WHO to share knowledge and research through the COVID-19 Technology Access Pool (or C-TAP).

Now, rich countries who already bought enough doses of the vaccine to cover their populations up to 5 times over are blocking another route to rapid production and distribution. Led by South Africa and India, over 100 nations are demanding a waiver of the current WTO patent regime which would allow generic versions of the vaccine and other treatments to be produced worldwide, potentially solving this crisis in months rather than many years. Yet at the last WTO meeting, the UK, the EU, the US, Canada, and a handful of others once again blocked this initiative. It is not a coincidence that the blocking countries already have enough doses and are the host countries for many of the biggest pharmaceutical companies.

Meanwhile, Boris Johnson has rather tellingly concluded that the existence of vaccines is down to ‘capitalism’ and ‘pure greed’. In fact, it was vas sums of public money, invested in education and science, the collaboration of thousands of scientists across the world, and a global network of hundreds of thousands of volunteers that have brought about the breakthrough that are the covid-19 vaccines. They belong to us all.